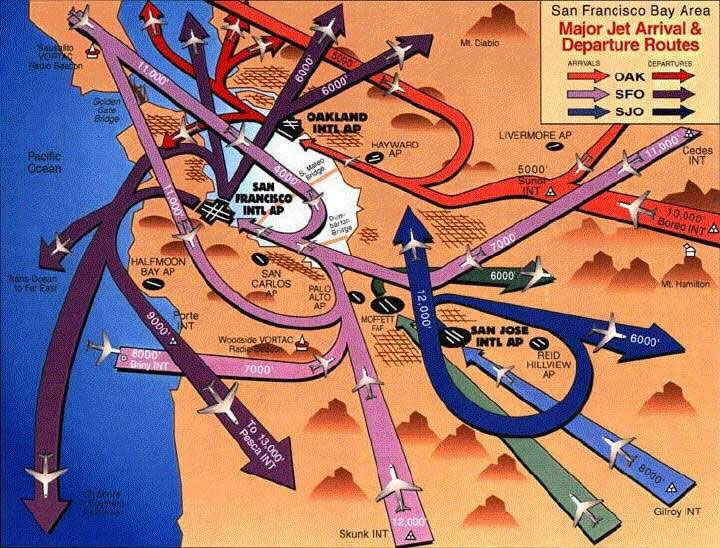 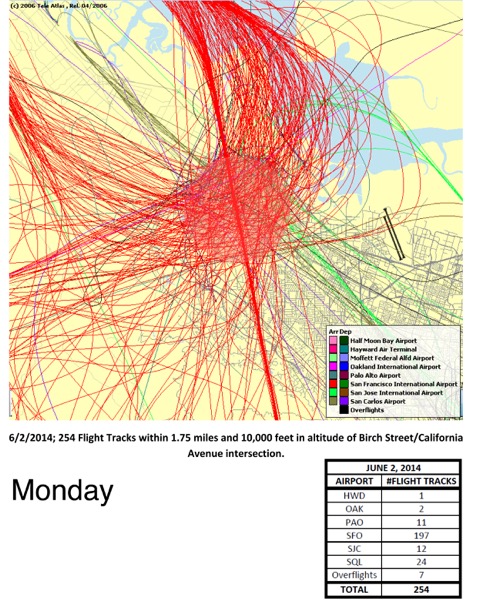 Traffic has been increasing at alarming and concentrated levels.  Community outcry and congressional efforts resulted in FAA engagement via the Select Committee of South Bay Arrivals.

To ensure these efforts result in relief, join us. Contact: info@skypossepaloalto.org

Nextgen Concentration of traffic over MidPeninsula

The number of flights over Palo Alto and neighboring cities has more than doubled because of a Nextgen design decision (without considering resident input) to funnel the majority of SFO arrivals through a single merge point . The proportion of flights near the bottom of the 4000-5000 foot altitude window has increased breaching a community agreement made in the year 2000 to maintain traffic above 5000 feet.

Flights from the north, south and west converge over the MidPeninsula. They aim for an altitude of 4000 feet over Palo Alto and East Palo Alto and from there, take the final approach into SFO. James Sun analyzed traffic growth between 3K and 5K feet based on flight tracks received from the FAA. His analysis shows the number of flights from the south and southeast has grown substantially.

The charts below are based on flight tracks received in their entirety via a FAA Freedom of Information Act request. 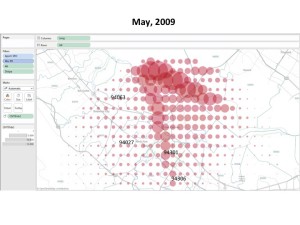 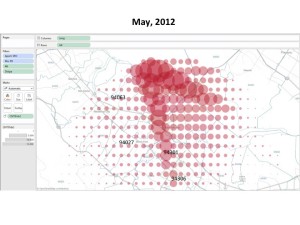 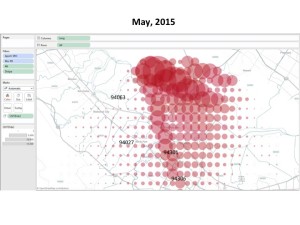 Certain jets flying over us emit a high-pitched whining noise that is particularly offensive to the human ear. They account for 17%-20% of the noisiest SF Peninsula over flights. Luckily, there is an inexpensive solution to this huge noise issue

. Sign the petition  to ask the airlines to spend less than $5000 per jet to retrofit their fleets with simple air flow deflectors that STOP the horrible loud “whistling” sound affecting millions on the peninsula

On December 2, Representatives Eshoo, Farr and Speier sent to a letter to the FAA Administrator along with reports from the Select Committee on South Bay Arrivals and the SFO Airport/Community Roundtable.  The three representatives: accepted the Select Committee’s and Roundtable’s recommendations; requested the FAA move towards implementation  “as soon as possible; requested the FAA provide a progress update within 60 days.

We recommend the FAA  prioritize these two recommendations: assess one or more alternate waypoints for southern arrivals into SFO; address the problem of low-altitude night flights.

The letter also cites the Committee’s recommendation that a successor organization be formed to be made up of local elected officials from the members’ three Congressional Districts.  The Representatives state that they “will work with [their] incoming colleagues in the next Congress to determine how best to move forward with that recommendation.”  Palo Alto – which experiences the highest number of overflights and is most impacted by SFO arrivals – should have a seat at the table.

SKY POSSE PALO ALTO provides the information on this website “as is” and does not assume any liability for any errors or emissions, or for any misleading use of that information.

Join our email list to get information about upcoming meetings and news by sending a request to info@skypossepaloalto.org

We promise not to overload you with mail!!

18 January 2017 Letter to Palo Alto City Council The city has a critical window in which to become part of a regional process designed to shape and implement jet noise solutions. However, the city must act quickly. Read Sky Posse's three requests to our elected officials.

#1 THE PROBLEM IS PERVASIVE
We have heavy air traffic from five airports. The Bay Area is the 7th largest airport Metroplex in the US. Flights affect Palo Alto residential neighborhoods, schools, and parks - frequent, loud, low-flying airplanes disrupting productivity, sleep, and quality of life.

#2 PALO ALTO IS DISPROPORTIONATELY AFFECTED
Our community is under the convergence of 3 of the 4 approach routes into SFO, with traffic descending above Palo Alto from the North, South, and West. Few, if any other communities at these distances from SFO, OAK, or SJC experience this daily level of traffic. As airplanes have been flying at lower altitudes and there are more flights, these approaches are more invasive. In addition, traffic congestion causes increased duration of noise when planes make turns to extend their routes over our neighborhoods as they line up for the final approach to SFO.

#3 ADDRESSING AVIATION NOISE POLLUTION OVER PALO ALTO IS AN URGENT ISSUE
The current levels of aircraft noise are not tolerable for a sustained period of time. Enduring flight route changes have been made over Palo Alto, which has historically tolerated noise impacts from far lighter air traffic, but not the hundreds of daily flights it is exposed to now. As a practical matter, the City of Palo Alto was never consulted on the changes to increase the capacity of all Bay area airports using these particular routes over our community.

#4 THE CONCENTRATION OF ROUTES TO IMPACT THE SAME NEIGHBORHOODS REPEATEDLY IS UNFAIR
NextGen’s precision routing technologies could in fact dramatically improve the situation to the benefit of both the flying and the residential public. When used unwisely, as they are now, they dramatically worsen it. It’s misleading to call NextGen’s “net noise reduction” policy noise reduction when it reduces the aviation noise for some by severely increasing it for others. This unfair distribution of the noise burden calls for alternate designs that consider the population on the ground.

#5 NOISE ABATEMENT MUST BE PROACTIVE AND PREVENTATIVE, NOT REACTIVE
The current system uses antiquated noise metrics, and policies that promote obfuscation. They exhaust and discourage impacted citizens from advocating for progress (it quiets the public, not the noise). The practice of excluding impacted communities on the ground has tilted the pendulum too far toward protecting commerce, but a sincere balancing of community interests has not been evident. Groundlings should be equal stakeholders with airlines, airports and industry in noise assessment and airspace design.

#6 THE CITY OF PALO ALTO HAS NOT HAD A VOICE IN NOISE ABATEMENT INITIATIVES
SFO has established a mechanism to 'prevent noise shifting between communities', as part of the SFO Roundtable, but this policy has been explicitly limited to the County of San Mateo. Palo Alto has never had such protections, and the results are evident. A body of regional oversight is necessary, which is inclusive of any community with a problem.

#7 THE SITUATION IS FIXABLE
The San Francisco Bay presents a unique opportunity to avoid flight descents that cross the heavily populated Midpeninsula residential areas below 8000 feet. Better design can be achieved with community input to assist the FAA in developing a more flexible and thoughtful route system. Improvements for both the residential and the flying public are possible - better flight routing, more equitable sharing of noise impacts, and the continuation of the FAA’s work on the modernization of other methods of noise abatement.

#8 PALO ALTO IS PREPARED TO HELP WITH SOLVING THE PROBLEM
An FAA administrator liaison specifically assigned to work with Palo Alto would be a good first step. Citizens are supporting a professional study, and want to be as effective as possible in working with the FAA to alter routes so that planes fly above 6000 feet when they cross Palo Alto and other cities and then descend over the Bay. Routes should also allow for a curfew to eliminate low flying nightly cargo and passenger flights.